Irrigation of sports fields : changes since the 1970s 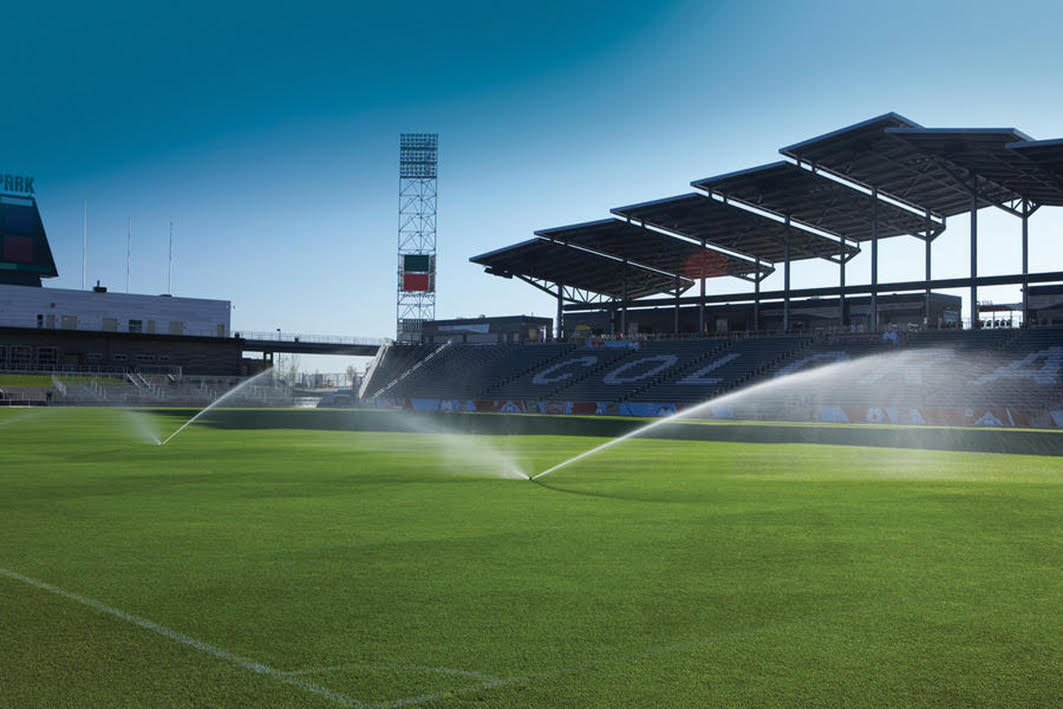 The first installations consisted of surface or even flood irrigation system.

At that time, Mini-hose reels or ‘Rain Trains’ were used for the surface irrigation of playing surfaces.

The main disadvantages to these systems:

• Moving the devices for irrigating the field in several strips (generally 3 to 4 runs are required).

• Quite a high operating pressure. The use of small spray guns (range of around 30 m) installed on the mobile carts supplied by a polyethylene pipe or flexible hose requires quite a high pressure (6/8 bar)

• Given that an irrigation run can have 3 to 4 times the amounts of water applied (20/30 mm), the field can sometimes become waterlogged.

• relatively low cost of the equipment.  Possibility of moving it to irrigate several other fields (play areas).

The 70s/80s: introduction of the first pop-up sprinklers used on the sports field

RB 87B. Long-range (30 m) pop-up sprinklers with adjustable arc, allowing for the perimeter of the field to be irrigated. A mini hose reel is always used for the central playing area of the sports field.

it has been possible to irrigate the whole sports field by using an integrated automatic sprinkling system.

The devices that permit this revolution are the following:

• RB 91DHL or Toro 634 long throw distance (30m) pop-up devices authorised for the playing area of the pitch because they are fitted with a natural grass turf cups. One problem is that their great distance from the sprinklers around the perimeter of the field, RB’s G*&B, for example, results in a very ‘average’ water distribution, especially in windy areas.

I-40 led to a real revolution. These devices are ‘ideal’ because, in fact, their small exposed diameter (less than 60 mm) allows for them to be installed outside or inside the natural grass laid playing area (including the centre). With 35/40 sprinklers, this solution gives very good results in terms of the quality of the water distribution.

we began to use the valve-in-head sprinklers around the perimeter of the field.

• fewer valve boxes and less inconvenience for the users. Possibility of easily controlling the sprinklers individually and thus configuring the irrigation run time / amount of water necessary and sufficient for each zone (¼-circle sprinklers, ½-circle sprinklers… shaded area, area exposed to the sun…)

So we come back to the installations with less sprinklers for ‘covering’ the surface to be irrigated: 12 to 16 valve-in-head valves around the perimeter (Hunter G995E or G885E, for example) and 3 to 8 sprinklers in the centre (Hunter I-90 or I-80, for example).

Finally, in the 2000s the need arose for the automatic irrigation of synthetic turf surfaces. The problem is thus very different. We need to ‘wet’ the field rather than irrigating it perfectly. The constraint of achieving a uniformity of distribution is, therefore, less important.  Spray-gun type devices are used around the perimeter (6 or 8) with a long distance of throw (40/50 m). The arrival of pop-up devices with a wide radius of throw in the 2010s (Hunter ST1600/ST1700V, for example) allow for the different needs to be addressed.

• Wetting the whole surface from the perimeter

• Avoiding any danger or aesthetic problem due to the fact that the equipment is embedded.

Example of the change in irrigation for a prestigious stadium: the Velodrome in Marseilles, France

The change in the irrigation system has been as follows:

• Before 1998: twelve RB 87B sprinklers around the perimeter and a Rain Train device for irrigating the central strip.

• Work carried out before Euro 2016: thirty-five Toro T7 sprinklers were installed by the company Chomat.

• 2019: complete restoration of the equipment with the installation, in particular, of the heating system and a ‘hybrid’ turf. As the stadium was then partially covered, the effect of the wind was less problematic. A decision was taken to spread out the devices in order to reduce their number and have less constraints during the numerous interventions required on the playing area: e.g. periodically changing the turf, overhaul after events (concerts…). The solution installed by the company Chomat was as follows: twenty Hunter G885E sprinklers around the perimeter, eight double-nozzle I-80 sprinklers in the centre. Given that the two types of devices had the same hydraulic properties, the range of throw and precipitation rate were exactly identical.

As observed and recalled for the prestigious Velodrome stadium in Marseilles, we are able to describe the following changes that have taken place over the years.

When automatic irrigation began, a number (10/15) of long distance of throw (30 m) sprinklers were used round the perimeter. No sprinklers in the centre.

In the second phase, the use of short distance of throw (18 m) sprinklers and increasing the number (up to 48) so as to have optimum coverage, particularly on account of the turbulent winds in the open stadiums.

Finally, for a number of years now we have seen the following design: medium radius of throw (20/24 m) head-in-body around the perimeter and sprinklers with double opposing nozzles in the centre. This gives a total number of sprinklers of around 24.

These modifications were made because of:

• The service and maintenance operations

• Changes in the structure of the large stadiums (roof)

• Changes in the equipment and techniques available.