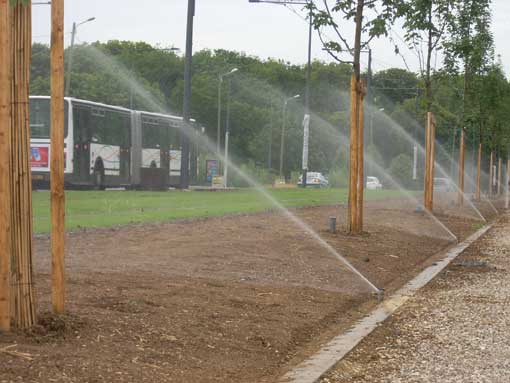 Nowadays, almost every large- and medium-sized city in France has a tram line.

In 2017 there were no less than some sixty tram lines operating in thirty French cities 1.

Apart from standing out as a method of public transport that meets the challenges of sustainable development, tramways are also genuine landscaping projects.

In fact, many tramways now have flora and foliage running inside and around the tramlines, mainly turf grass, thus allowing for vegetation and nature to be brought back to the city, which city dwellers are increasingly demanding. We can mention the examples of the lines in Angers and Tours, with grass laid along more than 50% of their routes. Or even the new lines under construction in Angers, which will have grass laid along 80% of their route 2.

However, grass is laid alongside the tram tracks within an urban and artificial setting, which in itself presents a number of challenges. Firstly, there are technical constraints, jeopardizing the sustainability, such as the thin layer of substrate of the platforms, thus limiting the amount of soil water available, or even the problem with the tram rails heating up under the sun, which could wilt or even scorch the grass. The vegetation in the city must comply with certain political and social criteria, which require turf to be aesthetic-looking and verdant.

Irrigation then becomes a necessity if these different constraints are to be overcome.  However, questions are being asked about the relevance of irrigation when considering the way the resource is managed and the amount of water consumed.

The effects of climate change have resulted in heat waves becoming more frequent and intense. Water thus becomes a resource that is becoming increasingly scarce and France’s departments are placing more and more restrictions on its use, which has a direct impact on the irrigation of the tramways.

There is thus a contradiction between the initial expectation (to have green spaces in the heart of the city) and the means required to ensure the aesthetic appearance of the turf (irrigation requires a whole array of technical infrastructures).

On the one hand, it is vital to ensure that water is managed to the maximum, using modern tools, but the irrigation methods also have to evolve, even surprising the users themselves sometimes.

A number of in-depth research projects were conducted in 2021, on Line A of the Angers tramway, to look at ways of finding the best solutions for managing irrigation of the grass sections of the tramways.

Ensuring that the appropriate amount of water is applied

Soil moisture sensors have become essential. Soil moisture sensors are a must among the probes that need to be installed in order to have a clear picture of the soil water status. The amount of information provided is vast and particularly suitable for the issue at hand. Ideally, they should be placed at two or three depths so as to determine the water flow path (in the soil), infiltration rate, etc.

Water consumption is directly related to the amount of water applied during irrigation cycles. Applying an appropriate amount of water means that over-watering will be avoided, thus reducing water loss through drainage or run-off.  However, under-irrigation must also be avoided so as not to affect the durability of the grass surface and spoil the aesthetic appearance. Water usage can, therefore, be managed with an eye on the efficiency of the irrigation scheduling programme: quantity, method of application, soil water infiltration rate, etc.

In order to determine the afore-mentioned, two zones on Line A of the Angers tramway, were selected for experiments to be carried out. The aim was to determine the following irrigation thresholds:

– A high threshold that corresponds to the maximum soil water holding capacity.

– A low threshold, which corresponds to the level where we begin to see signs of the yellowing of the grass (i.e. the visual appearance of the grass does not meet expectations).

– Maximum irrigation threshold: Soil moisture at -10 cm after 48 to 72 hours of draining a waterlogged soil.

– Minimum irrigation threshold: Soil moisture at -5 cm after the appearance of signs of yellowing of the grass.

Implementing these thresholds on the experimental zones will reveal the actual water requirements and also determine with certainty the moments when irrigation can be delayed.

Having confidence in the measurements provided will then allow the user to overcome the traditional aopprehension of the supervisor when he or she is asked to shut down the irrigation system.

Over the period of mid-June to mid-July 2021, because of the weather, it was determined that irrigation was not necessary on the experimental zones equipped with sensors, whereas on the rest of the line, irrigation was still maintained as a precaution (we can say in hindsight that this was due to a lack of information).

In this test, the volume of water that would have been saved is in the region of 3500 m3.

The deployment of sensors along the whole of line A of the Angers tramway is in progress following these pivotal trials. Determining these two irrigation thresholds on several stretches of the line will allow irrigation to be adjusted more precisely in the long term and to not only save on water but above all, to have the certainty of being able to manage irrigation as a result of measurements that can be analysed, verified and compared with other readings.

The ethos of using measurements rather than trial and error represents genuine progress in the practice of modern irrigation.

Decoder-based irrigation control devices are more relevant than ever. Water consumption management is achieved by using an efficient technical irrigation scheduling method, which is made possible by modern central control systems.

It is essential to have a centrally controlled programmer. Nowadays, the decoder models are practically the only ones being installed because they offer more functionality than other technologies and the benefit as far as management is concerned is undeniable. One single programmer or controller will allow for a reduction in irrigation run time; irrigation can be compressed into one favourable period (often late at night) and the amount of water applied can be adjusted without having to set each path or station.

Current centralised control systems allow the user to have access to all the controllers in the line in one fell swoop in order to adjust the irrigation, or adapt the times or days, to fit in with the maintenance schedules.

The technological transformation of the original installation was firstly achieved by setting up a test area, equipped with a Hunter ACC2 system. There are few irrigation control systems that are sufficiently developed to be able to guarantee the availability of tools that can manage the system and read the measurements provided.

Among the benefits in terms of water management, the recording of the actual flow through each station or path allows you to know exactly the amount of water applied and thus adjust accordingly. Of course, this only works if maintenance is of the highest quality, which ensures that each sprinkler functions properly and is adjusted correctly.

The reliability of a wired decoder system no longer needs to be discussed. In an urban environment, where radio links are risky, and knowing that, even if the programming of the irrigation is adjusted every day for the following night, it should be possible to adjust the system in real time in the event of a rapid change in the weather (typically a sudden storm in the evening). The rising number of delays in data transfer is a real problem. Although public acceptance of irrigation can change very quickly in the face of possible inconsistencies in the management of irrigation schedules, the worst scenario would be the flagrant display of sprinklers operating right in the heart of the city while it is actually raining. In this respect, the possibility of an efficient and inexpensive rain shut-off device would inspire trust and confidence.

Many central control programmers are capable of incorporating a specialised automated weather station that can shut-off irrigation. In fact, measuring the rainfall and defining a precise threshold for switching off the system is essential (how could we imagine that we would be demanding a level of management that applies the amount of irrigation water to the tenth of a millimetre and yet be satisfied with a crude rain gauge that can only be accurate to a precision-level of several millimetres?).

Thus, the challenge is how to deploy an array of technologies with each having been enhanced in their own particular field. Nowadays, the most compelling solution is to combine a controller with the latest generation of decoders, accessible by internet, which can incorporate a device that automatically measures local rainfall, with accuracy, and which can shut down the irrigation system.

At the end of this 2021 season, this solution is going to be deployed along the whole stretch of Line A.

The precision rain gauges connected to a monitoring and data processing platform enable the user to automatically cross-check the rainfall data with the soil moisture measurements and the functioning of the irrigation system.

The irrigation of the tramways is now adapted sector by sector, and not in a general manner.

The technique now allows for controllers to be equipped with external cut-off modules, which are themselves managed by multi-factor analyses: rainfall, moisture content, weather forecasts.

Cultural shift in the visual aspect of turf

The mindset and the demands concerning the aesthetic appearance, particularly the lushness of the grass, are also components that have a significant impact on the water consumption of the tramway. In fact, as far as the image is concerned, the grass areas of the tram tracks should always be lush and green, thus meeting the original demand to bring green spaces to the city centre.

Therefore, there is a certain inconsistency in the demands of city dwellers: a green area of grass is much appreciated but changes in public opinion have emerged: the visual appearance of the grass area must be reconciled with the weather conditions. A green grass area in the middle of the summer, during a heatwave, causes outrage, and scheduling irrigation to comply with the restrictions imposed on account of the weather will become the norm.

This requires faster and tighter control of the irrigation system. Finally, the technical requirements regarding expertise and changes in the demand are going to become interwoven.