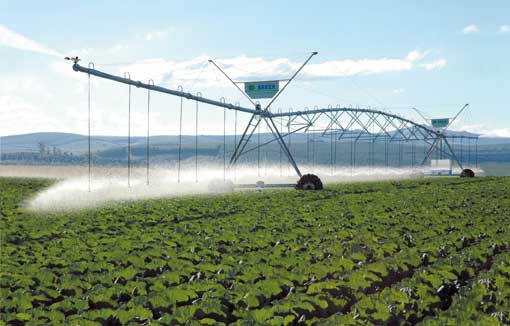 The anchor unit or pivot point

The centre pivot is anchored to a concrete slab when the pivot point is fixed. For moveable pivots, where the anchor unit can be mounted on wheels (or skids), the machine is towed from one irrigation site to another.

The water enters the pivot through the riser pipe, which is connected to the pivot swivel. The machine’s electric power is supplied by an electric cable leading from the transformer (control box mounted on the pivot point) via a connector ring consisting of stationary brass rings and rotating contact brushes for devices making a complete rotation.

The use of a generating set could be of interest in situations where there is a poor power supply (voltage fluctuations or simply too difficult and/or too costly – because of the remoteness). Another solution developed recently is the use of solar panels. The energy required for the operation of this type of equipment is sufficiently low for this type of supply. This technology could be suitable for areas not connected to mains electricity.

For small fields located far from the electricity system, there is also the possibility of a water-powered pivot limited to one single span. There are a number of connections or valves fitted to the pivot point column, for drainage or installing a pressure gauge, flow meter or an injector for certain products (fertigation). When the device is fitted with an end gun, operating intermittently, the intake solenoid control is operated from a central point.

The spans are truss structures that travel between two towers. They are made of steel pipes, strengthened by structural components called angle bars and tie rods (trussing). With a length of 30 to 72 m., the clearance below the structure is 2.5 to 3.5 m. (possibly 5 m. for certain applications), giving a total height of 3.5 to 5 m. In the case of water with a high content of suspended solids or when the pivot is used for fertigation, in order to extend the working life of the pipes, the manufacturer Irrifrance has come up with a “Polychem” option, where the galvanised pipe is lined with a polyethylene tube. Some manufacturers offer folding systems for the last span.

The towers support the spans. Each tower has two wheels, the whole unit being driven by an electric motor, sequentially controlled by a micro-switch to ensure that all the spans are aligned. The control system of each tower is protected by the casing. There can be more than fifteen spans on a fixed device. The optimum overall length of a machine (mechanical and energy constraints) is around 400 m. The towable devices are generally restricted to 4 to 6 spans but they can also have more than six spans.

There is a guy-wired structure at the end of the device (supported by metal cables) mounted in the form of an overhang. Reaching a length of 31 m., it is often equip­ped with an end gun. It can be supplied by a suppressor situated at the end of the machine, if there is not enough residual pressure, and it can operate in a continuous or intermittent manner in the irrigation zone, according the needs defined by the user. The overhang can be retrac­table to avoid certain obstacles (trees, buildings…).

The vital organs of the system

The vital organs of the irrigation system are the sprinklers, whose flow rate varies along the length of the boom to take into account the increased surface area irrigated and the wider radius and greater pressure losses. The calcula­tions are summarised in the “nozzle package”, which is specific to each machine, the features of which depend on the hydraulic parameters of the installation (available pressure and flow rate, diameter and coarseness of the pipes). The nozzle package is supplied and guaranteed by the manufacturer for making the appropriate assumptions and calculations. The installation of the sprinklers must strictly comply with this package or the irrigation unifor­mity could be severely compromised.

The different types of sprinklers

There are five different types of sprinklers:

• Impact sprinklers: operating pressure between 2 and 4 bar (with a spray angle of 6 to 8) and they generally have a radius of 10 to 15 m. These sprinklers distribute the stream of water in the form of a “coil”: the water is not distributed evenly over the whole surface area of the arc and it arrives in ‘batches’. This normally results in a high instantaneous precipitation/ application rate. It is not recommended for germinating crops or soil surfaces that are poorly filtered and/or compacted. This technique is on the decline.

• Sprays: low operating pressure of 0.5 to 2.8 bar, they have a small range of 1.5 to 5 m. and the water is projected onto a fixed spray plate as it leaves the nozzle and then the grooves create a stream of fine jets, at different distances. There is a poor uniformity of distribution and the instantaneous precipitation rate is high.

• Rotary sprinklers (rotary sprays): operating pressure of 0.7 to 3.5 bar with a range of 9 to 22 m. The water is projected from the nozzle onto a plate rotating on an axis (its movement being driven by the water pressure), which distributes the jets at different ranges in circular form.

They can be fitted directly onto the span (mounted upside down or on drop tubes). The uniformity of distri­bution over the whole irrigated circle is quite good and the instantaneous precipitation rate can be very low. The rotary system, where the rotation speed is quite high, projects the water flow in the form of fine droplets: the uniformity of distribution is then excellent and the instantaneous precipitation rate is low.

• Oscillating sprinklers: operating pressure of 0.4 to 1.4 bar, with a range of 4 to 9.5 m. The water is projected from the nozzle onto a plate oscillating around a fixed point, its movement being driven by the water pressure. The uniformity of distribution over the whole irrigated circle is excellent and the instantaneous precipitation rate is low. The water is applied as droplets and not in the form of jets, as in the case of impact sprinklers, low speed rotary sprinklers or sprays, making their use particularly suited to sensitive germinating crops or compacted soils.

• Bubblers (Low Energy Precision Application) (Oscillating sprinklers): operating pressure of 0.5 to 1 bar. The aim is to apply the water under pressure as close to the crop as possible.

The choice of sprinkler and ope­rating pressure, therefore, depends on the following criteria:

• Sensitivity of the crop during germination: the more sensitive the crop, the finer the droplets should be and the water applied gently (reduction in the kinetic energy of the water).

• Sensitivity of the soil to sprin­kling: when the soil’s infiltration rate is low, then a sprinkler must be chosen that applies water over a wider surface area. A sprinkler will thus be chosen on account of its wide radius and the resulting good uniformity of distribution.

• Wind and temperature conditions (evaporation): the small-sized droplets will be more sensitive to evaporation or wind drift. Some sprinklers using too high pressures can create a “mist”, which can lead to significant losses caused by evaporation and wind drift, in particular.

With regard to the soil’s sensitiveness to sprinkling, if sprinklers and bubblers are chosen, where the radius of each one is radically different, this will have an impact on the instantaneous precipitation rate applied to the soil surface. Figure 1 shows an example of the instantaneous precipitation rates for the different nozzles on the market (source Nelson Irrigation).

It shows the infiltration curves for two soil types and the instantaneous precipitation rate of the different nozzles (D3030 = spray-type sprinkler, A3030, R3030, S3030 = rotary sprinklers, O3030 = oscillating sprinklers). The graph reveals that sandy soils do not pose a problem for most kinds

of sprinklers, but this will not be the case with loams or clayey soils, which have a lower intake rate than sandy soils.

A solution proposed by the manufacturers to reduce this instantaneous precipitation rate and thus avoid run off, is to install double rows of sprinklers. This solution imposes extra constraints on the structure of the machine (weight, surface area exposed to the wind).

This allows for the irrigated surface area to be increased at minimal cost. It can be made to operate intermittently so as to adapt to the field. The sprinkler guns used are of the low-angle jet type (15 to 18°) and are generally smaller than those used on hose reels, the nozzle diameter varying between 10 and 25 mm. For lower flow rates, a large sprinkler can replace the gun.

This is a device that allows the sprinklers to spray closer to the crop so as to reduce susceptibility to wind drift (and evaporation in arid situations) and improve irrigation efficiency.

It is recommended that they should be avoided in situations where the water contains suspended particles (in the case of ferruginous water in the Landes region, for example). Even though the drop pipes are often made of polyethylene or flexible hose, they often go hand in hand with pressure regulators fitted at the bottom of the pipe. The iron in the water can remain in the drop pipe and, when the device dries out, this can lead to corrosion and blockage of the pressure regulator. If no pressure regulator is fitted, there are no problems with using drop pipes for ferruginous water.

The drop pipes are mainly used to reduce wind drift, but this must be balanced against the climatic situation and type of vegetation irrigated. They often go hand in hand with a fall in pressure, which reduces the throw distance and can lead to a more intense application of the irrigation water.

The drive chain is the linkage that transforms energy into movement.

They ensure that the towers move. They consist of an electric motor and a reduction gear. The electric motors are positioned in the towers, in the middle of the transversal bar, which connects the wheels (axle) and they should be isolated.

Between the reduction gear and the wheels, there is normally a shaft drive transmission to provide the required output.

The rotation speed of the transmission is reduced by 50:1. The reduction gears are of the worm or gear wheel type, which require a brake, with the latter tending to be more popular because they use less energy. They have to be equipped with a drain outlet and drained periodically.

These come in different sizes with different treads. The choice will depend on the acceptable ground pressure, precipitation rate applied, maximum slope, clearance required below each span and required travel speed (the larger the wheel size, the greater the potential travel speed).

The maximum speed of the last span can range from 1.5 and 6 m/min (generally 2.5 m/min). The higher the required speed, the more power is required and the faster the parts will wear. This is one of the reasons why the length of the machine should be limited to around 400 m, when operating in a full circle.