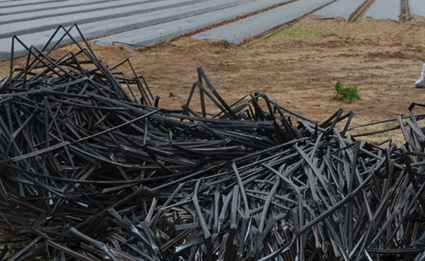 It was agricultural plastic film in 2009; followed by the twine and net wrap used on round bales in 2013, then anti-hail netting in 2015, and now the agricultural plastic recovery sector has a scheme for used flexible irrigation tubes or drip tapes. This scheme operates according to the principle of shared responsibility and we will see in this article how all the players (manufacturers, traders, distributers and farmers) have worked together and set up a national scheme open to all farmers since January 2019.

An eco-contribution used to finance the scheme

Flexible irrigation tubes or drip tapes allow exactly the required amount of water to be applied to the plant’s roots and thus this bring about a considerable saving on water. They are worthwhile from an ecological point of view, but they have one disadvantage, they only last one or two seasons at the most and then they have to be replaced. There is then the sensitive issue of how to recycle them.

Based on this observation, the different players have together decided to organise a recycling scheme for the flexible irrigation tubes. They have come up with the idea of incorporating the cost of collection and recycling into the price of the product through an eco-contribution. More specifically, the proposal is to include the cost of the end-of-life management of the product into its initial purchase price. “Collecting this eco-contribution will be the responsibility of the first supplier in France, i.e. the manufacturer”, explained Bernard Lemoine, Director of the CPA (Agricultural Plastics Commission).

The manufacturers belonging to the network must display and include in the invoice, in addition to the price of the product, the amount relating to the eco-contribution, per product, which will be paid by the farmer to finance the scheme. For flexible irrigation tubes, as a start, the amount, agreed upon by consensus of the players involved has been set at 75 € exclusive of tax/tonne; it will be reassessed each year. This eco-contribution has been included in the selling price of the tubes since 1st January 2019. Thus, the manufacturers can guarantee the disposal, collection and recycling of the product, but they cannot do everything themselves. The project has been entrusted to Adivalor, who organises the pick-ups (collections) in each département and the CPA, which manages the financial aspect of the collections.

“The CPA manages the project financially and redistributes the eco-contribution to Adivalor, which organises the collections in each département, often supported by the local chamber of agriculture”.

“We do not as yet have detailed information about how the collection and recycling procedure will work, but the plans are at an advanced stage”, explained Pierre de Lépineau, director-general of Adivalor.

And he continued: “The expensive part of the collection process is the transportation. We have, therefore, set a limit for quantities that we will collect at zero cost”. Thus, tubes from the larger farms (with a minimum of 3 tonnes of used plastic tubing) can be collected directly from their property. Smaller-sized units must take their used plastic to communal collection points, which have to be set up. Three tonnes of used plastic tubes corresponds to almost 30 kilometres of tubing, which in turn corresponds to 30 hectares of crops. This would represent almost half of the farms concerned.

“The first collections will begin in April 2019, so there is still time to organise everything”, commented Pierre de Lépineau.

More specifically, the operators of the collec­tion process, as far as the tubes are concerned, are the general distributors of agro-inputs for market gardeners and specia­list distributors of irrigation equipment. “There are almost 200 of them throughout France, in targeted market gardening areas, mostly in the South of France and the Nantes region, as well as more specific production areas in Brittany and the North”, added Mr. Lépineau. A distributor’s decision to become a collection operator is made on a voluntary basis.  They are not obliged to take part but it is in their interest to do so because it falls within the rationale of product support being provided during its use. While taking part in the collection process, they offer their customers an additional service. Some have already incorporated into this practice other agricultural plastic waste products already collected by Adivalor (such as agricultural plastic film, twine and net wrap used on round bales in 2013 and even anti-hail netting). “For the new distributors joining the network, they have to adapt to change. They have to be organised in order to be able to receive and store the waste”, explained Mr. Lépineau. “training may be necessary”.

Adivalor is also responsible for organising the operation of recycling the tubes. The recycled granules are then integrated into new products, such as bin bags, tubes or pipes, plastic connections… We are part of a circular economy.

Waste disposal guidelines for the farmers

There are three options available for the users:

• leave the tubes in the ground or burn them, but that is no longer possible under current legislation.

• collect them up (manage them) themselves and look for a company to get rid of them.

• or have a system involving a collective network, even if it means paying more for the product.

Most farmers have opted for the third method, and in fact it was at their own request that the network was set up. Within the current context, this cost is unavoidable  and is in fact a real response to a specific demand.

Collections should begin in April 2019. In the meantime, Adivalor will be carrying out the task of providing the farmers with information and training via the producers’ organisations, in particular, so that they will be aware of the contractual and procedural requirements for collecting plastics. Very precise guidelines on how to prepare the waste will be sent to the farmers prior to collection, such as:

• separate the tubes from the mulching film,

• bundle up or wind the tube into a coil.

• store in an open area that is accessible to semi-trailers (articulated lorries).

The farmers will be informed about the collection by the manufacturers and distributers when they purchase the product, or via the press (two or three newspapers are interested in taking part in these systems) and also at a press conference to be held on the subject, which will take place at the Sival market garden show in January 2019.

However, whatever happens, the farmers are experienced in these kinds of practices; they have already been recycling their agricultural plastic waste for a number of years.

“Our aim is to collect 50% of the flexible irrigation tubes by 2022 and recycle 75 of these”, explained Pierre de Lépineau, At the present time, about 35% are collected but the main players in the area of agricultural plastic are unanimous: “If the scheme had not been set up, the quantity collected would almost certainly have dropped to 20%”.

This kind of operation ties in with a European plastics strategy. “We should consider the product not in terms of its life span but rather as part of a plastic value chain. It is a new form of rationale, within a circular economy”, explained Mr. Lépineau  “We can see this system being developed not only in Europe, but also throughout the world, in North America, Latin America and India”.